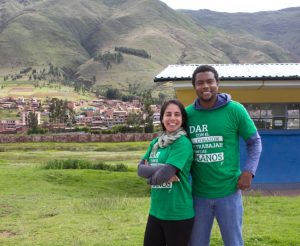 Yenny Delgado and Robert Rivers founded Umbrella Initiatives in the summer of 2009. While working together, they had one big idea that they should commit themselves to ensure that individuals living in poverty would be benefited in concrete ways that really involved buy-in and support from local communities. From these idealistic beginnings, they decided that they would somehow help others.

To show their commitment to the ideals of Justice and Equality, they asked that friends and family members support their mission. Through these initial donations, the first Backpack Project and several other projects were completed.

The official paperwork for Umbrella Initiatives was officially accepted by the State of Maryland on the 28th April 2010 and received official notification from IRS as a 501©3 not-for-profit organization. Today, Umbrella Initiatives continue with their dream to promote equal education for children in the risk conditions and rural areas in the Andes.

In starting the organization, Yenny had one key idea she wanted the word “Initiative.”  Primarily, because from years of work in America South she knew first hand that there were several individuals in communities such Peru and Bolivia with both the determination and clever ideas to make a positive difference society.  However, these individuals and small groups needed support. Thus, the organization would be an Initiative that works hand and hand with organizations and individuals in Peru, the United States, and elsewhere that had a comment to making a difference.

While, hearing the earnest dedication and desire in Yenny’s voice; Robert immediately knew that somehow it would form an “Umbrella.”  Essentially with the idea that the organization would help to fund small projects bringing together community groups and sponsors to improve the situation, akin to how an Umbrella is synonymous for bringing various entities together so to would be the organization.

From these long conversation the name and the organization was setup – Umbrella Initiatives Foundation.